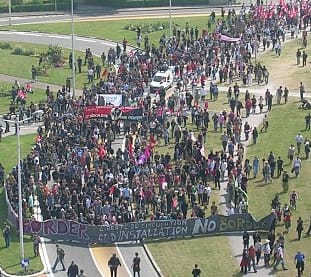 A Report from the No Borders Camp

In early November, I joined seventeen other members of the Queer Youth Organizing Project (QYOP) of Pride at Work San Francisco to attend the first US/ Mexican No Borders Camp.Here, organizers from all over Mexico, the United States, and a number of other countries gathered for a weeklong convergence at the Mexicali/ Calexico border in the Sonoran Desert.The camp was aimed at creating a temporary trans-national space to challenge increased border militarization and migration controls, and the economic system that makes such repressions necessary.

QYOP worked for six months prior to the camp to educate members of the community about the project, and helped to organize citywide meetings with a broad coalition of student and community groups who ended up participating in the No Borders Camp.In Calexico/ Mexicali, we worked to build a radio station for the camp, led chants for a march to the ICE detention center in neighboring El Centro, participated in workshops on topics such as NAFTA and the growth of maquiladoras on the Mexicali side of the fence, and hosted a transnational dance party at the wall.

Although to some, an action calling for “No Borders” sounds extreme or radical, for many of us in the labor movement, the need for this sort of cross-border organizing and solidarity work is actually quite intuitive.Since the passage of NAFTA and other free-trade agreements, we have seen hundreds of thousands of union jobs exported to countries with lower labor and environmental standards.