At the same time that the No Borders Camp took place in Calexico/Mexicali, the Indigenous Peoples’ Border Summit of the Americas II took place from November 7-10, 2007 on the Tohono O’odham Nation. Click the link below to see the site for the more information on the summit including repression faced by the border patrol. The rights of native peoples are of the utmost importance to all those working on border issues. Let us continue to improve our solidarity and commitment to all people in the struggle.

SAN XAVIER, TOHONO O’ODHAM NATION — A human rights crisis for Indigenous Peoples living along borders in the Americas threatens their survival, with rapidly expanding militarization and new laws which limit their mobility in their ancestral territories. See more at:
http://indigenousbordersummitamericas2007.blogspot.com/

Shut Down Downtown TACOMA! Against I.C.E! Against Raids! 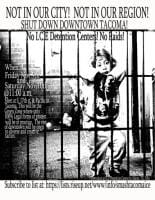 Shut Down Downtown Tacoma! We want to show the powers that be, that a homeland security detention center will not be tolerated in our communities and in our region. This will be in solidarity with the No Borders camp that will be happening the same week down south. We plan on sending a very visible, clear message by not allowing business as usual to happen on these days. 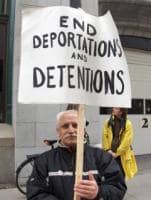 to stand in solidarity with all those detained as a result of a racist and exploitive immigration system. The Laval Detention Center is a prison where at any one time there can be upwards of 100 immigrants held, including families with children. These walls unjustly separate families and destroy lives.

They are part of a world apartheid system that controls movement and displaces entire communities. The camp is the creation of an autonomous space where we will be holding workshops and engaging in collective discussions in order to contribute to movements fighting for dignity and justice. As we camp in front of the walls of the Laval Detention Center we are also standing in solidarity with struggles against similar walls; from the US-Mexico border to Palestine.

Stop the Wall: Week of Action Against the Apartheid Wall

The Palestinian grassroots Anti-Apartheid Wall Campaign is a coalition of Palestinian non governmental organizations and popular committees that mobilize and coordinate efforts on local, national and international levels. These efforts are focused upon stopping and dismantling the Apartheid Wall, and resisting Israeli occupation and colonization.

A call for a coordinated, popular, and grassroots effort to tear down the Wall came out of Jerusalem on the 2nd of October 2002, from the office of the Palestinian Environmental NGOs Network (PENGON). From this moment the Anti-Apartheid Wall Campaign was born. The Campaign initiated its work on three levels: acting as the voice of communities locally; mobilization and coordination nationally; and additionally as part of the global struggle against colonization, war and racism.

Since its inception the Campaign has been the main national grassroots body mobilizing and organizing resistance against the Apartheid Wall. This growing responsibility, and the need for people from affected communities to be more involved in decision-making, necessitated a change in the Campaign’s structure. Now the Campaign is working as an independent body with its own board. It presently coordinates the work of 54 popular committees in communities which will be (and are being) destroyed by the Wall.

As part of the activities of the No Borders Camp that is being celebrated from the 5th to the 11th of November on the USA-Mexico border, El Barko Pirata (the Pirate Ship) invites you to…

** Film Festival Against Borders **
Documentaries, discussions, literature, news from the other activities against the borders throughout the world…

Friday, November 9, starting at 5pm at Ortiz Dominguez 36-A